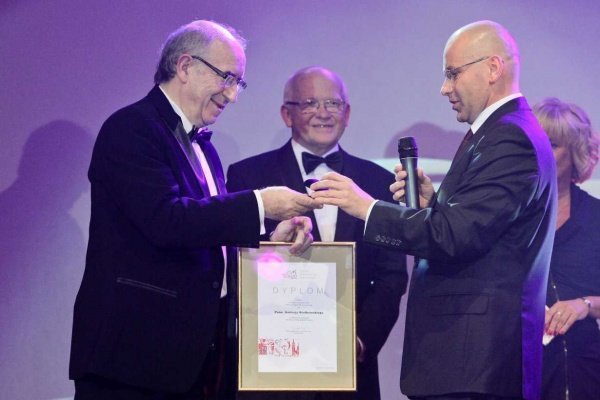 It started with an amazing show by the Group of Musician Actors from the Białystok Puppet Theatre and stilt walkers from the Akt Theatre. Our guests were greeted to a tune played by a brass band. Later, there was a presentation of the employees working at Mazurkas company, after which the guests gathered in the main lobby of the MCC Mazurkas Conference Centre and went to the Zeus Hall for the artistic part.

Our most distinguished guests also appeared on stage, congratulating us. The president of the Polish Tourism Organisation Rafał Szmytke decorated the owners of Mazurkas with the gold badge of merit to Polish tourism. Andrzej Siezieniewski, vice president of the Palace of Culture and Science gave the owners the statuette symbolising the award and congratulated them on being the Palace’s biggest customers. Other people joined the wishes and congratulations: the President of the Business Centre Club Marek Goliszewski, as well as the Head of the West Warsaw County Jan Żychliński, the Mayor of Ożarów Mazowiecki Kazimierz Stachurski, and many other representatives of the world of business.

An excellent dance ensemble, previously unseen on a wider scale in the event world, was the star of the evening: together with performers known from shows such as Mam talent and You Can Dance, as well as from the film Kochaj i tańcz, performed excerpts from Metropolish musical, with choreography by Jarosław Staniek. 35 dancers appeared on the stage.

After the performance, the guests went to the new Bolero Hall, for its official inauguration, graced by the performance by dancers from Russian Revue IMPERIUM. During the inauguration ceremony of the new, 35th hall at our conference centre, the hotel staff proved their professionalism once again, rearranging the layout of the Zeus Hall completely in 20 minutes. The theatre layout (for 1,000 people) was replaced by a luxuriously prepared banquet hall. There were 1,300 seats prepared in the Zeus Hall and in the other banquet hall, and all were taken.

When everyone had sat down at the banquet tables, the food arrived. That was the part of the evening which many people had awaited most eagerly. 50 waiters on stage and around the room presented, in a very spectacular way, bottles of wine that were subsequently served at the tables. This was preceded by an interestingly choreographed show staged by the sommeliers.

A true masterpiece, however, was a dance performed by 100 or so chefs and waiting staff to the Radetzky March, all in an exquisite light setting. Some of the dishes, for instance wild boar, mutton and a 3.5-metre-long sailfish, were placed on litters borne by the chefs in a fanciful procession. The guests ate and subsequently hit the dance floor. Drugi Tydzień cover band rocked the house as usual.

There was a also a show of magic performed by illusionists from the Metamorphosis group, who left many people in the audience flabbergasted with their perfectly executed tricks.

Clients, partners, friends and collaborators of Mazurkas Travel partied until the small hours, celebrating the beautiful jubilee. Judging by the e-mails we have been getting from those who attended the Friday night party, we can definitely call this an extremely successful event!